PERU, Land of the Incas


The diversity of Trujillo is enormous. From the archeology that brings together the Mochica and Chimu cultures with architectural expressions such as Chan Chan and the Huacas of Sun & Moon respectively, to the spectacular beaches of Huanchaco where we can see Caballitos de Totora, and passing through the area of ​​the historic center with a unique color. The domains of Lord of Sipan have no comparison. The Royal Tombs of Sipan Museum, one of the best in the world. Visit the Huaca Rajada and immerse yourself into the Moche culture in a journey through time. Do not miss the imposing pyramids of Tucume.

Arrival in the morning to Trujillo and transfer to the selected hotel.

CHAN CHAN
Start of the Chimu route, heading to the Huaca Arco Iris (Huaca Dragon), used for worship by the ancient Chimus, who decorated this temple with representative figures of the fertility of the earth. Departure to the Chan Chan Site Museum, which has three permanent and one temporary rooms. Here we will learn about the way of life of the Chimu settlers, ceramics and goldsmith's pieces. Then we will visit one of the 9 Palaces of the Citadel of Chan Chan, the Nikan Palace (former Tschudi Palace), which has environments decorated with friezes of various marine motifs, among them: the ceremonial plaza, fish and bird corridor, the hall of the altarpiece, shrines or audiences, Huachaque or ceremonial well, the room with 24 niches, second plaza and funeral platform. Free time to have lunch.

HUACAS of Sun & Moon
Departure to the Moche Countryside and start of the excursion to the Huaca of the Moon. Arrival at the Huacas of Moche Museum, which has ceramic pieces that show the iconography and activities of the Moche people. Then visit the Huaca of the Moon, Moche religious center, where we will walk through its rooms full of high relief murals with the representation of their god AIAPAEC (The Decapitador), warriors, naked prisoners, dancers, animals, giant spiders, the Sun, the stars, abstract motifs, etc. From Huaca of the Moon, we will appreciate the Huaca of the Sun, a pyramid 43 meters high, built for administrative purposes. We will also spot the Mochica Urban Zone, which was the area where high society of the Moches lived. Finally, in the Craftsmen's Area, we will see pieces of ceramics made with the style, colors and shapes that the ancient moches used, that the artisans maintain until our days. Transfer to the hotel in Trujillo. Overnight in Trujillo. 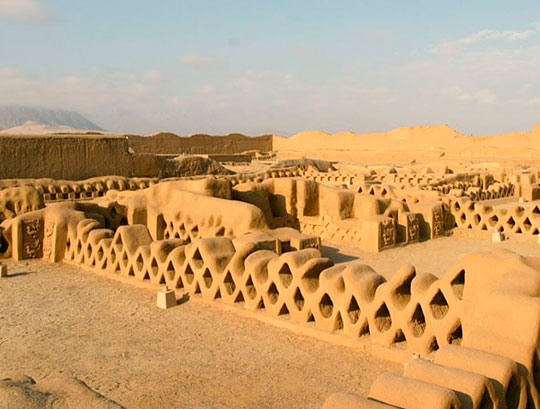 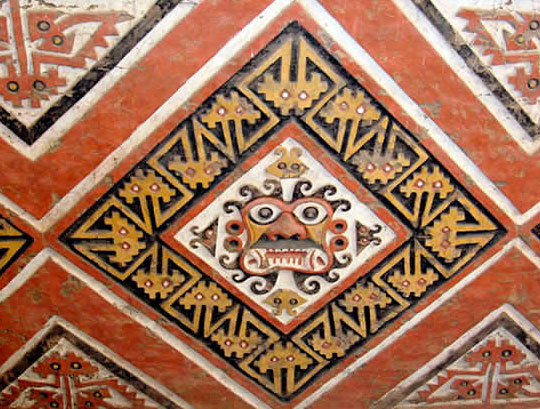 SIPAN MUSEUM
It is a Peruvian archaeological museum inaugurated in 2002, it is located in the city of Lambayeque, Region of Lambayeque. Its architectural design has been inspired by the ancient truncated pyramids of the pre-Inca Mochica culture (1st to 7th century AD). The museum concentrates more than two thousand pieces of gold. The purpose of the museum is to show the tomb of the Lord of Sipan, which was found in 1987 by Peruvian archaeologists Walter Alva Alva and Luis Chero Zurita. Among its pieces are jewelry, ceramics and grave goods. The discovery of the Royal Tombs of the Lord of Sipan marked an important milestone in the archeology of the continent, because for the first time the magnificence and majesty of the only ruler of ancient Peru found until that date was revealed.

HUACA RAJADA
Then we will go to Huaca Rajada, which was an area devastated by huaqueros or huacas thieves, until in 1987 the Peruvian archaeologist Walter Alva and his team, with the help of the authorities, undertook a project to rescue the archaeological site. The result of his research was the discovery of the famous tomb of the Lord of Sipán (July 26, 1987), the only tomb of a pre-Columbian governor found intact in Peru and dating from the third century (Tomb 1). It is about a man of 1.65 m, and about 40 to 45 years old. He was found next to the remains of 8 people (three women, two men, one child and two guardians) and animals (two llamas and a dog), presumably sacrificed so that they would continue to serve him in the afterlife, according to the belief moche. The remains of the Lord of Sipan rested in the center of a mortuary chamber, sheltered in a large coffin made of large boards. On the other hand, the catafalque of his companions were made of reeds. They also found 209 ceramics, many of which contained offerings. The body of the main character was covered with numerous ornaments, weapons and emblems of gold, silver and golden copper.

Also, spondyllus shells, of ritual significance, were surrounded by the body. The most lavish jewels are the earmuffs, all in gold with lapis lazuli inlays. Another exquisite piece is a necklace of beads in the shape of peanuts or peanuts, half of them in gold and the other half in silver. Months after this discovery, two more tombs were found: that of a contemporary priest to the Lord of Sipan (Tomb 2), and that of a warrior who was baptized as the Old Lord of Sipan, because he was older (Tomb 3). After the tour of the Huaca Rajada we will return to the hotel. Overnight in Chiclayo 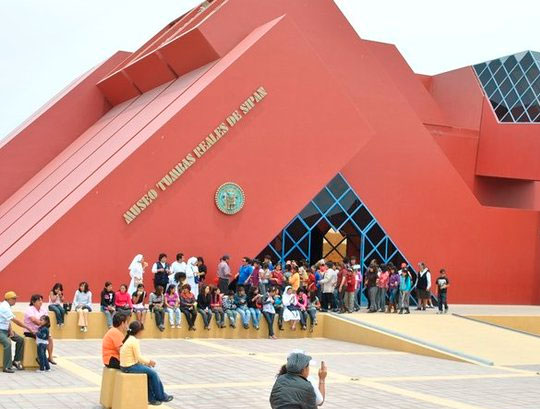 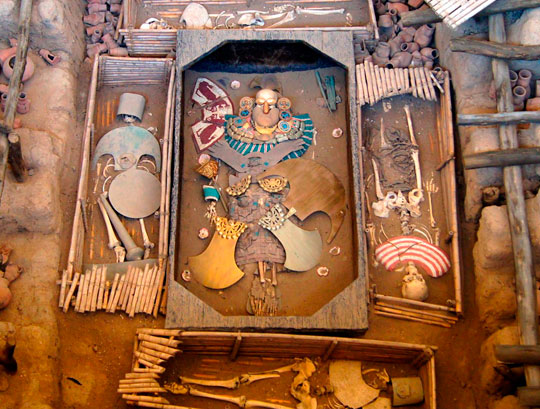 Day 3: Transfer to the airport or bus terminal

After breakfast at the hotel we will transfer you to the bus terminal or the airport.
End of services.